This is a summary of The Infinite Game speech by Simon Sinek at the Nordic Business Forum Sweden 2019 conference. He makes a clear distinction between playing by rules of the infinite game; and playing the finite game. We need to choose our vantage point before engaging in activities. Business is an infinite game where, unfortunately, most still play it as if it were a finite game.

How I enjoyed Simon’s speech. It was personal, meaningful, important and very inspiring. I recommend anyone to listen and take in his message. Our world needs it. This summary is written from my notes taken during the speech, somewhat intermingled with my own thoughts, I hope I have not misrepresented anything major in Simon’s message, if so, please let me know through the comments to help fix them!

We engage in life, business, marriage and other infinite endeavors. They are all games that can’t be won per se. You participate and you do your best. If you see the journey as a finite game, after a seeming victory — there is the next battle, and the next, and the next. We should rather see our challenges as hurdles to overcome, as inherent parts of our journeys; as ways to build knowledge and mastery. As parts of the journey towards our just cause. We can’t see the end of the journey, there is no clear outcome and there are no defined rules to guide us as to what it means to win. 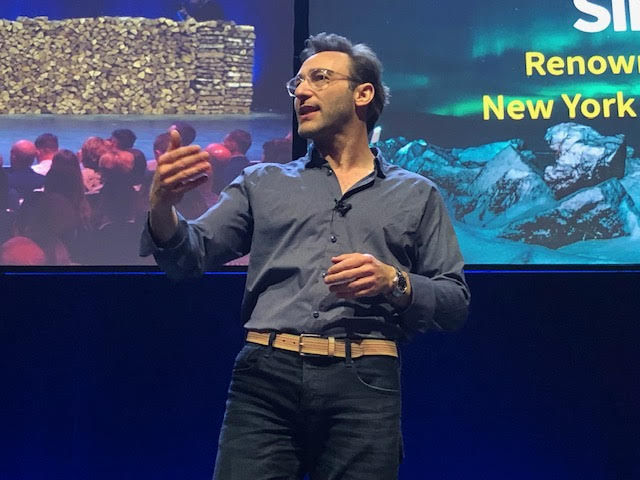 Simon made the comparison between Apple and Microsoft in the 80es, where Apple sought to produce outcomes, while Microsoft sought to beat the competition (from Apple). Microsoft saw Apple as a competitor, where Apple sought to advance a cause. When you pursue a cause, the only one you can compare against, is yourself. This brings us to the question of how we lead, and how we guide our leadership in infinite “games”.

The infinite mindset is not about the competition. It is about outlasting your competition. The most important factors for playing well are:

Persue a just cause

You must identify and search for the just cause, for which you are willing to sacrifice yourself. If it is a just cause, the sacrifices will feel worth it, it’s can serve as a relevant measure. Like the United States Declaration of Independence, it describes an ideal state, not the journey. There are endless tasks to complete along the way. The revolution was the finite part, then the real work began. The journey needs to be one we are willing to die walking the path.

We can only get closer to the goal, not really attain it. Everything we do converges towards the goal; and in all progress, we get a sense of purpose.

Simon shared his story of when he visited the Four Seasons hotel. He was overwhelmed by the attention he received from one of the waiters, and when he ordered his coffee he asked whether the waiter liked his job. The waiter answered quickly and without any hesitation: “I love my job”. “Why?” asked Simon. “Because I feel cared for, the managers always ask if they can help, and they see me for who I am. I can be myself.”

The same waiter also worked at a casino, where the work environment is completely different. The waiter was asked to follow protocol and managers kept questionning him and ensuring he did his job perfectly. They are in search for errors. The waiter felt he was not able to work nearly as well there.

In a finite mindset, managers ask how they can wring out more performance out of employees… Employees are not towels you can wring out and throw away. In unhealthy environments, people are afraid of making the right thing for fear of breaking protocol. They rather avoid making a mistake, and such cultures where issues are not dealt with properly easily lead to disaster.

People need to feel safe raising issues in their teams, whether they are work related or not. They must be able to raise them without fear of retribution, or fear of losing their jobs. Lack of trust means the team is really just a group of people that show up at work lying, hiding and cheating every day. And low and no trust environments builds up over time.

How can we create an environment where people can be, and bring, their best?

You need a worthy rival, not a competitor. Someone you want to be or become. A rival you hate, but secretly and very reluctantly really admire. And it’s not uncommon it’s mutual.

When you see their strengths, it helps you see your own weakness. But, in an infinite game, winning one or the other run doesn’t matter. There will always be more runs. You both have the journey, and you can never say any one of you won. Sometimes you are ahead, sometimes you aren’t.

Good worthy rivals are better than we are. And in infinite games, we only have one real competitor, ourselves. And our rivals help us become our better self, towards the worthy cause.

Who is your worthy rival?

You need a capacity for existential flexibility

We must sometimes choose the cause ahead of what other people feel makes sense. There are times when the cause we pursue can make use need to bet, and risk, everything. Those times should be rare though. Steve Jobs reasoned like this when he decided to pursue the graphical user interface (inspired by Xerox): better we blow up the thing and fail, than let someone else do it instead.

The antithesis is how George Eastman continuously lowered the price of film for camera through innovation with Kodak and made huge profit. They even invented the digital camera, but failed to bring it to market, due to their fear of losing sales on chemical products such as photos. They enjoyed royalties on their numerous patents for years into the digital photo revolution, but those ultimately dried up when the patents expired. and we know what happened, Kodak fundamentally missed their mark and their just cause, photographic quality at reasonable prices (or that is how we saw them).

Are you willing to stay in the infinite game?

You need to develop the courage to lead

Becoming a parent is easy. Parenting is hard.
Becoming a boss is easy. Leading the team is hard.

To become fit is hard. You need to commit yourself to a new lifestyle and work out. It’s the same with leadership and parenting, you need to commit and not know all the rules. Your can’t play an infinite game well with a finite mindset.

Your decisions need to be based on purpose, not on the pressures of making the numbers. It’s one thing to post your values and purpose on the public website. And it’s a completely different thing to make decisions based on them.

We are being called naïve. But we are actually the majority, not the minority. The majority has an infinite mindset, but “just” need the courage to exert it. But it’s hard - really hard. Are you playing your game by the wrong rules, the rules for the finite game, or for the infinite game?

Are you willing to turn down money that puts food on the table, because it would not advance your cause?

You need to make the choice.

From the Q&A session moderated by Pep Rosenfeld

On the paradox of being human

We live in the paradox of being human. On the one hand, we are individuals, on the other we are part of groups. We can’t just be selfish, or completely sacrifice us to the group. We need to sacrifice us to causes that make sense.

On WHY, and the just cause

We develop our WHY as individuals until the age of about 18, and live based on that WHY ever after. Similarly, the formation of a company gives it its WHY, and it never changes. Perhaps a change of leadership might lead to a rebirth and a new WHY, but it’s rare.

On why mid-level management is so hard

Simon helped us gain perspective on enterprises and why the different layers of it often have fundamentally different views on the journey of the company.

On developing awareness of the infinite game

Conversation with the audience:

— “You can only lead the horse to the water, you can’t force it to drink”.
— “But how do we help those who struggle?”
— “You wait. They have to go willingly.”

Simon then quickly went through the law of diffusion of innovation (starts at 10.45) and said that he and others, for a time, were almost religious about it. Essentially, the large majority asks why it would work, and are not helping make it work.

You want to pick to work only with the ones willing to sacrifice time and energy to the cause and idea. For the rest, you need to wait. This was one of the key messages he shared with the startups he coached in finding their whys and just causes.

“Walk away from business you don’t want.”
“Ask for help. Do things together.”

All my summaries from Nordic Business Forum Stockholm 2019:

@simonsinek at #NBFSweden: With a finite game viewpoint, after a victory - there is always a next battle. We can instead see challenges as hurdles to overcome; as ways to build knowledge and mastery; as parts of an infinite journey towards our just cause. https://t.co/m5EUU6uQL3